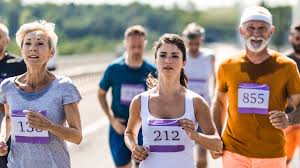 A study suggests that training and running marathon improves the health of the arteries and almost cuts four years off their vascular age.

The research was being done at the Barts and University College London where 138 amateur runners were practicing for participating in the London Marathon.

The tests of the arteries revealed that after 6 months of training the arteries have gained back some of the youthful elasticity which will be a crucial factor for staying healthy and avoid chances of heart attacks and strokes in the future.

Their blood pressures also fell as if they had been given pills. Those who were overweight or had other problems seemed to have gained most out of the practicing marathon.

Including any type of aerobic exercise like running or jogging is very important for our body. It took the boys four and a half to five and a half hours to complete the 26.2 miles.

But it can have other side effects which can be potentially life-threatening if you have pre-existing heart condition and attempt to run a marathon. Runners have died attempting to do so but these are rare instances.

Dr. Charlotte Manisty who was the lead researcher said that people who are already suffering from heart diseases or have other conditions should take a recommendation from the doctor before running over such long distances as it creates a lot of pressure on the heart. If the heart muscles are not strong enough to sustain the pressure or beat fast to supply oxygen quickly it can cause a heart attack.

But she said that running is one of the best exercises to keep our body healthy and also reduce excess weight.

The best way to prepare for a marathon is to begin with light warm-up exercises and gradually increase the distance.