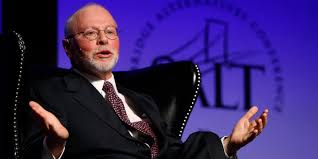 Elliott Management, owned by hedge fund activist Paul Singer, is reportedly buying stakes worth USD 2.5 billion in SoftBank, the investment firm behind one of the biggest IPO flops of 2019, Adam Neumann’s WeWork. A spokesman for Elliott Management, while speaking to The New York Post, stated that the company is aiming to bring in plans that can help bring the SoftBank shares back on track. The spokesperson also said that the market severely undervalues SoftBank’s assets and that Elliott Management has already started working with SoftBank’s management to constructively work for finding a solution to help the investment firm.

Ever since the WeWork saga hit SoftBank, the company has reported a total loss of USD 4.6 billion. In November, SoftBank also reported its first quarterly loss in 14 years. SoftBank had invested USD 10.5 billion into Adam Neumann’s WeWork to bring WeWork’s evaluation to USD 47 billion. The company kept reporting losses to now stand at an evaluation of merely USD 7.5 billion. Masayoshi Son, the CEO of SoftBank, also took a major hit to his image as he was one of the top supporters of Neumann. Soon after the investment plans from Elliott Management were announced, the SoftBank shares went up 10 per cent. SoftBank holds investment in Uber, Slack, and Doordash as well and is currently evaluated at worth USD 96 billion.

Talking about SoftBank’s CEO, Masayoshi Son, the Japanese billionaire has recently received praises from BlackRock chief, Larry Fink. Fink called son an “incredible investor” despite SoftBank’s recent downslide. SoftBank has invested USD 20 million in Alibaba Group Holding almost two decades ago, which now stands at USD 130 billion plus. Flik admitted that not all of Son’s decision went right but said that what Son has achieved in his 30-year career so far is not replicable.